The transport of large amounts of gaseous and particulate pollutants across the oceans has become an important area of atmospheric research in recent years. For instance, it has been shown that significant amounts of mercury, ozone and mineral dust are transported from East Asia to Western North America. While data on the long term impact of these transport patterns is sorely lacking, its potentially disruptive effect on the negotiation of global regulatory emission control treaties has prompted the creation of a specific UN taskforce in 2004.

To assess the impact of Asian particulate pollution on Western Canada as well as general trends in background aerosol, a state-of-the-art single particle mass spectrometer designed and build at UBC is being deployed at Environment Canada’s Whistler High Elevation site, located at the peak of Whistler Mountain, BC. This site offers the rare opportunity of nearly year round measurements of tropospheric air unaffected by local background. While multiyear data collection is expected to help reduce the uncertainty on the importance of transpacific transport for Western Canada’s air quality, the single particle capability will also prove useful to determine the extent and nature of aerosol processing during transport over the ocean. Detailed measurements on the cloud forming capability of the imported aerosol are also planned, in collaboration with scientist at Pacific Northwest National Laboratory. This project is a collaboration with researchers at UBC (Allan Bertram and Ian McKendry), Environment Canada (Anne Marie MacDonald and Richard Leaitch), and Pacific Northwest National Laboratory (Daniel Cziczo). 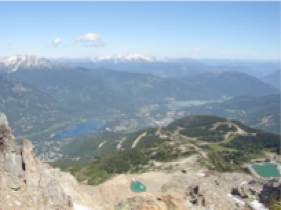 Photo taken from Whistler Peak near to the measurement site 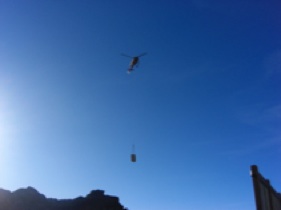 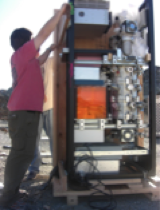