Kinetics and Mechanisms of Ice Nucleation in the Atmosphere 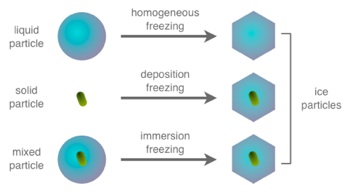 Ice clouds in the troposphere play a key role in the Earth’s climate system by strongly influencing the Earth’s radiative properties. These clouds form when ice nucleates on or in aerosol particles in the troposphere. Shown below are different mechanisms possible for ice nucleation from atmospheric aerosols.
Our research focuses on understanding these mechanisms and determining the kinetics of these processes. Results from this project should provide building blocks for accurately representing ice clouds in climate models. The end result, improved models, should provide better tools to investigate the impacts of increased levels of CO2 due to fossil fuel combustion upon the physical environment and to better understand and address climate change.

Ice nucleation in the arctic region
The goal of this project is to understand and predict the properties and formation conditions of atmospheric ice clouds and mixed-phase clouds (clouds that contain both ice particles and liquid water droplets) in the Arctic region. We will accomplish this goal by carrying out the following tasks:

(1) Through a series of focused laboratory studies, we will determine conditions at which ice nucleates on or in aerosol particles relevant for the Arctic region. Specifically, we will determine the conditions at which ice nucleates in water, aqueous ammonium sulfate, and aqueous sulfuric acid particles containing soot and mineral dust inclusions.

(2) From the laboratory data, we will determine the parameters necessary for improving the description of ice nucleation in atmospheric models.

The results from the laboratory experiments will be used to derive ice nucleation rates as well as relationships between the probability of freezing and temperature, ice saturation ratio, and size of the insoluble inclusions. These results will then be used to determine the critical energy of the ice embryo as a function of temperature and ice supersaturation for each aerosol type tested in the laboratory. This data will then be used as input for atmospheric models. The second task will involve a collaboration with Éric Girard of the University of Quebec at Montreal. 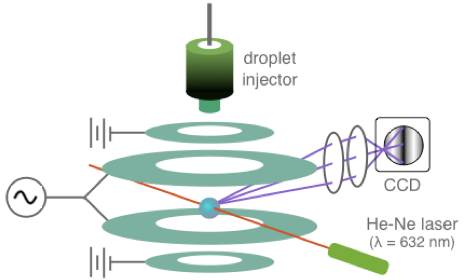 The conditions required for freezing will be measured using an electrodynamic balance. The electrodynamic balance (EDB) is a double-ring electrode configuration with two end cap electrodes (diagram at right). It is based on the configuration used by the Agnes group at Simon Fraser University (SFU). Single droplets are created using a commercial droplet generator, and the droplets are charged by induction. Charged particles can be trapped and suspended at the centre of the balance for hours to days. Light scattering will be used to determine if a particle crystallizes while suspended in the trap.

We are using an optical microscope coupled to a flow chamber operating at low temperatures to conduct ice nucleation studies. A CCD camera interfaced to a computer allows for the capture and storage of images during an ice nucleation experiment.